skip to main | skip to sidebar

Over My Head in Hollywood

Fresh off the boat from Hawaii In 1982. Special FX dreams swirling, I walked into the red brick offices of Don Post Studios on Lankershim Blvd in North Hollywood and begged to do something - I dunno? Anything! I had learned of Don Post, the man, years ago in the pages of Famous Monsters of Filmland magazine. I'd fallen in love with his deluxe, "over-the-head" classic monster-masks from the striking photos in the Captain Company catalog in the back of the mag. 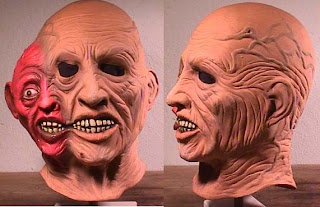 My Don Post mask: Schizoid
As a teen I corresponded with Don Post and was a huge fan. By the time I made it to Hollywood, Don Sr. had passed away. But on that exciting day I visited the studio, Don Post Jr. actually remembered my gushing fan letters to his father and took pity on me. I didn't have so much as a portfolio or snapshot of any work to speak of. Yet, within an hour of my first visit, Don Jr. had loaded me up with a plaster armature/mask-form, modeling clay and a handful of sculpting tools to get me started. He also gave me a guide-sheet to follow to his specifications. He said, "go to it, kid." I felt like this was the biggest break in the world for me. 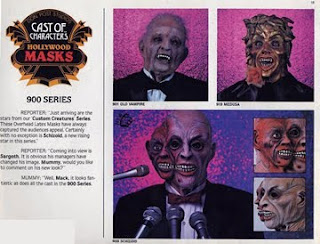 1983 Don Post Catalog featuring MY mask!
(courtesy the Halloween Mask Assoc.)
I worked diligently in the kitchen of my apartment in Northridge, California. After a couple of weeks, I dared to bring the sculpt into the studio. It was a mask of a humanoid creature with an underdeveloped twin growing out of its head. Don Post was not only receptive, he was downright encouraging. He called a meeting of his staff and they did an on-the-spot critique of the piece. They educated me about doing more to sculpt wrinkles that would contribute to the "stretch factor" of the mask, making it easier to pull over a head. They told me to tone down my detail as too many lines would cause the plaster mold to develop razor sharp grooves that might cut a worker's hand. 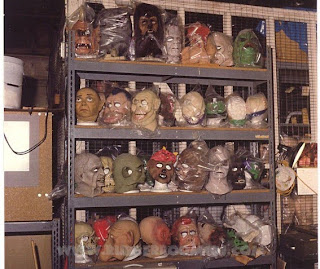 Bottom - center on a shelf of painting-masters at DP Studios
Don then offered to take over my sculpt or to give me another chance to implement his notes, which of course, I did. In a couple more weeks, I turned in the finished piece and it went into production! My original name for the mask was "Johnson & Johnson," but Don thought we might get into trouble using that familiar corporate brand name. So, "Schizoid" it was! Having my mask join the Don Post family was a highlight of my young life. Viewing it in the company CATALOG was just crazy! I saw it in stores and at Disneyland too! Don gave me 5 copies of the mask to give to my family and friends. One went to my high school art teacher Jean Noguchi, one to my Mom, one to Dad and one to my best monster-pal Sean. Naturally, one went to Forry and his Ackermuseum where it lived happily among fellow monsters until the big old place was shut down and we moved to the mini-mansion. 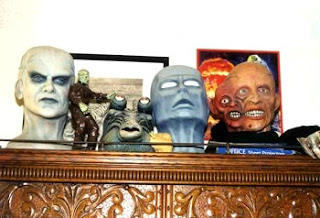 Schizoid - proud to be at home at Forry's Ackermuseum
The entire Don Post Studios family was so generous and nurturing at a time when I felt myself a stranger in a strange land. Contributing professionally to the Post legacy that had inspired me as a kid was an incredible confidence builder for this island boy. Today, when I see Don Post Jr. I feel such gratitude. When I shake his hand and tell him my story, he looks at me a little funny. I recognize that look. It's the reaction of a person who is so used to doing kind turns that it's almost embarrassing to be singled out for doing a kind turn. But truthfully, Don's kindness allowed me to conquer one of my life's dreams. Thanks to him, I can say that I fulfilled my fantasy of designing and sculpting a Don Post, deluxe, over-the-head mask! 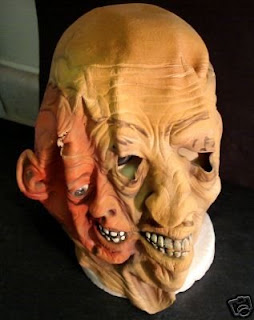 The Few Who Get Me